Few events are as exciting or as enjoyable as a football watch party, which combines delightfully casual vibes with a festive and often competitive atmosphere. You won’t find many other events that provide this enjoyable mix of relaxation and excitement.

While football viewing parties typically deliver wonderful memories, these events start to feel a bit stale over time. Yes, it’s a blast to eat greasy food, down cheap beer, and cheer with your friends — but what if you’re ready for more? Why not amp it up with special games and competitions designed to enhance every aspect of the viewing experience? 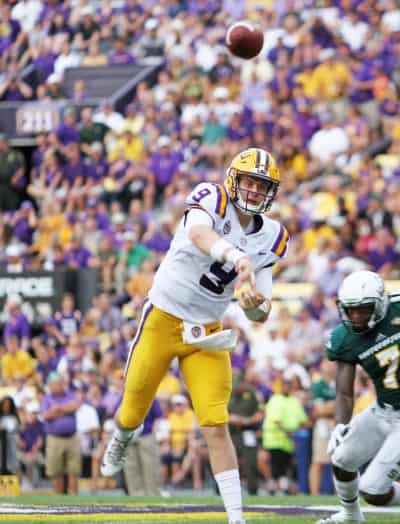 If you’d like to level up your football viewing party, consider throwing an adults-only event in which you and your best buds are encouraged to let loose. This is your chance to transform an ordinary game day into an extraordinary occasion. Below, we highlight football party ideas for adults that will make your event the talk of the town.

Whether your guests are football experts or completely clueless, invite them to try and predict the game’s outcome before you settle down to watch. This is a great option for those who aren’t into gambling but could benefit from the added excitement of making predictions — and hoping they play out.

Be sure to add an enticing prize to the mix to make your questionnaire that much more thrilling. After the game is over, you can scour the answers or even read them out loud to determine who came closest to the actual results. That person will win not only the prize you so carefully choose, but also, much-deserved bragging rights.

Prior to the party, create a questionnaire, complete with the names of each team and the name of the person answering the questions. This person should predict which team will win and by how much. Other questions may highlight the anticipated number of sacks, interceptions, or field goals. Keep it simple, unless you’re willing to scour through long pages of answers.

Similar in some respects to a pick ’em questionnaire — but played actively during the football game — bingo will ensure that even casual NFL viewers remain tuned in to every aspect of the event. And since football games are jam-packed with memorable moments taking the form of exciting touchdowns, big hits and even end zone dances, paying homage with a game of bingo is a lot of fun.

Prior to the party, create unique football-themed bingo boards with spaces featuring specific moments that typically occur during football games. For example:

Spaces such as “coach screaming on sidelines,” “official blows an obvious call,” and “fan in the crowd wearing a ridiculous outfit” combine nicely with traditional spaces for expected events such as long touchdown passes or missed field goals. 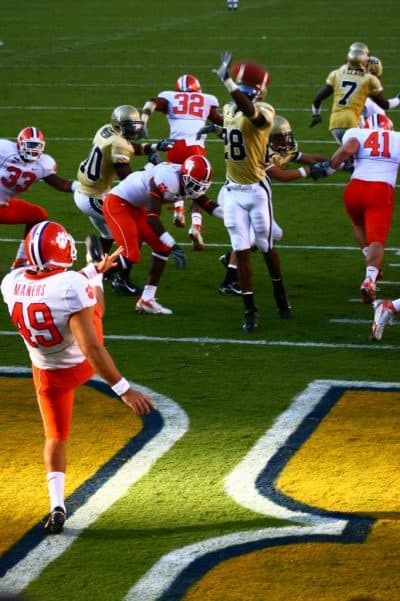 “Punting Deep” by Timmy F. is licensed under CC BY-NC-SA 2.0

And don’t forget to include some eye-rolling TV commercials and studio host cliches! Bingo cards could also focus on commercials, with spaces highlighting ads for beer, trucks, pizza, and other football game standards.

The regular rules of bingo should apply. Consider playing a new round per quarter so multiple people have the opportunity to win a small prize.

Amp up your bingo game with larger-than-life cardboard cutouts of bingo boards and break your guests into teams to compete for top prize! These are great for regular or annual watch parties, and a wonderful tradition everyone will look forward to.

You don’t need a rocket for an arm to enjoy an old-fashioned game of bean bag toss. Liven up this game by assigning football-related point values to each space. If one team achieves a huge lead, cut down the deficit by landing a bag on the “safety” spot, which provides additional points as well as another toss. Cornhole can also be modified to fit into the overarching football theme. Red bags, for example, form excellent “challenge” bags. If these land in a specific hole, they can be used to overturn your opponent’s last score.

Cardboard cutouts could make great bean bag toss bases or backs, and you can customize them with the team colors and logos of your choice!

Determine exactly how much your guests know about football and their respective teams with a lively game of trivia. Casual or competitive, you’ll find that this adds quite a bit of intrigue to your event. Depending on the scope of the party, this activity can either be arranged as team trivia or a free-for-all. 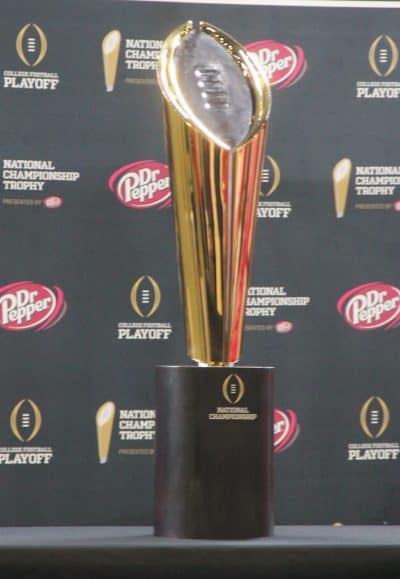 When selecting questions, go as generic or as specific as you desire, based on the expertise of your guests. You can highlight the season thus far, basic team tidbits, or even facts that apply to the NFL in general. Hardcore fans will especially enjoy answering questions about their favorite team’s history. These questions can be asked prior to the big game or peppered throughout the event to add interest. Don’t forget to select an enticing prize for the winning individual or team.

Darts are always fun, but dedicated football fans particularly enjoy any game that allows them to desecrate images of their least favorite players from opposing teams. Hence, the value of including a rousing game of darts at your NFL party.

If you invite guests who cheer for both teams, feel free to add a little extra competition in the form of cardboard cutouts featuring each of the day’s featured quarterbacks. These can either highlight the player’s head or entire body. Either way, guests will be eager to throw accurately and take down their NFL nemesis — at least in cardboard form.

Drinking forms a core component of most adult football watch parties. Typically, however, it’s limited to chugging beer while staring at the TV screens. Take the fun of drinking to the next level by incorporating a variety of beverages and an even wider array of games.

Classics such as beer pong are always appreciated during football-themed parties, but it’s also fun to incorporate the actual game of football. If you prefer drinking games to bingo, instruct guests to take a swig every time something important or interesting happens. For example, players can take a drink when they spot an irate coach getting in the face of an unsuspecting referee. If you prefer to keep it simple, take a drink for every touchdown, field goal, or opposing team interception.

Commercial-based drinking games are also a blast. Choose a topic or company expected to appear multiple times during the game. Budweiser, for example, is a top candidate. Every time the chosen item or name is mentioned, take a drink.

The right foods can make or break your football party. Guests look forward to chowing down on wings, pizza, guac, and more. Why not get them actively involved in this key aspect of party planning? Feel free to stage a cook-off competition, in which attendees strive to impress one another with their culinary skills. Not only does this free you from the need to provide all the fixings, it brings a unique element of food-based adventure to the event. Allow guests to vote on their favorites from various categories, with the winner of each earning a special prize. 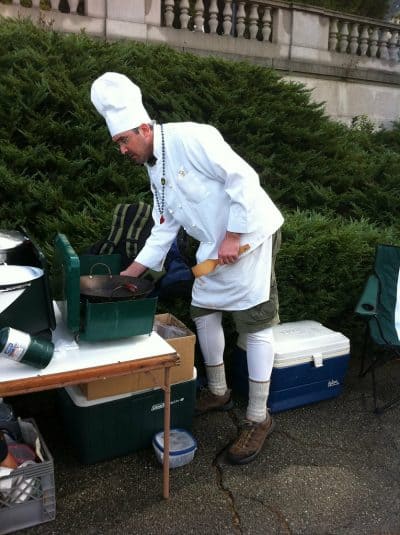 “Checking the Tailgate” by Sean_Yoda_Rouse is licensed under CC BY-NC-SA 2.0

Why let NFL athletes have all the fun? Nothing should stop you from playing your own exciting game of football — except, perhaps, excessive food or beer consumption. Keep it safe by removing tackles from the equation. Touch and flag football are just as fun but won’t end with a trip to the hospital. 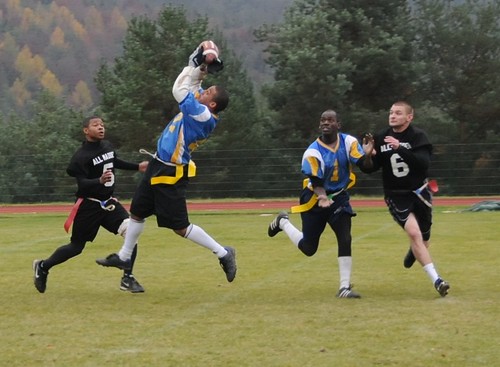 Ask attendees who plan to play football to bring extra shirts in one of two selected colors to make it easier to distinguish between teams. When determining who goes on which teams, consider sticking to a theme (Giants versus Jets fans, for example) or letting pre-selected captains do the work.

Break out the pigskin and get your throwing arm loose with a game of toss. Depending on how much you value the items in your house, this game can be played both inside and outside. Place prized around the playing field and assign point values to them. If these items are pegged by a flying football, the thrower receives a specific number of points. A cardboard cutout of your favorite receiver can also serve as the perfect target for your less-than-perfect spiral.

Charades is always a crowd-pleaser, but the football-themed version will be an especially popular addition to your party.

During this goofy game, players are encouraged to act out or reenact some of the most iconic, ridiculous or famous moments in football lore, such as the New York Jets butt fumble, the Immaculate Reception, or the Lambeau Leap. Other examples of ideas to act out include:

If you want to get extra creative, allow players to act out scenes with partners. These can feature key moments from your favorite team’s history. Minnesota Vikings fans, for example, could act out the Minneapolis Miracle, when Stefon Diggs made an unexpected catch against all odds. Others might prefer to play Randy Moss mooning the Packers. Likewise, Giants fans should enjoy recreating the iconic helmet catch.

Pin the football will have everyone in stitches! This game functions almost the same as pin the tail on the donkey, except that the pins should look like footballs and the display should reflect a field goal. This is a great option if you’re on the hunt for DIY football party decorations, as it adds instant pizzazz to your party.

Another option: using cardboard cutouts of your favorite mascot. For example, fans of the Detroit Lions can play pin the tail on the lion. Athlete-based games can also prove hilarious, such as pin the cheesehead on Aaron Rodgers or pin the Vince Lombardi trophy on Tom Brady. The options are virtually endless, so don’t hesitate to think up something truly original for your party.

Football Party Games Are Fun For Everyone

Whether the guests at your party are hardcore fans or casual viewers, the right games and activities will ensure that they feel both welcome and entertained. BigHead and life-sized cardboard cutouts can take both your games and decor to the next level. To learn more about your options for incorporating cardboard cutouts into an epic football watch party, contact Cardboard Cutout Standees today.