No matter what anyone says, basketball finals are most definitely a holiday, and the end of the basketball season is right around the corner! Whether you’re watching pro-level, college-level, or k-12 basketball finals, it’s a time to get together and celebrate.

It’s the time when an average of 70 million sports fans fill out brackets in an attempt to project the outcome of 67 back-to-back games (63 if you don’t include the first four). It’s a time of friendly competition, betting, debates, and NBA Finals and March Madness parties.

Photo by fabfiver5 | CC BY

If you’re getting your friends or family together for a basketball party, make it more than a gap sport between football and baseball, watched with a big screen and a few snacks. Make it an event on game day. And if you’re not celebrating the basketball season but instead having a basketball-themed birthday party for that special basketball fan in your life, you’ll find some great ideas here for that too.

When Does the Basketball Season Start and End?

In the NBA, Exhibition games typically start in September and the regular season begins in October. The full season lasts for 10 months and ends with the playoffs happening in April and May and the finals in June.

The WNBA season starts with both exhibition games and the regular season in May and then concludes with playoffs in September. The finals usually happen in October except in years when the FIBA Women’s Basketball World Cup is held, in which case the season is shortened and the finals happen in September.

In the NCAA, the regular season starts in November and lasts until April with the playoffs beginning in May and the finals happening in June.

The K-12 school basketball season typically starts in November and ends in March and sometimes April depending on the state.

Like all good holiday parties, there are decorations, good food, and things to do at your get-together. Activities could include games, contests, or anything fitting of fun tournament madness. For great food, think tailgate-style, with burgers, hot dogs, chips and dip, etc. When it comes to decorations, you want to go all out and support your team and those in your bracket, not to mention the spirit of basketball itself. Now let’s get into the details of party planning for the big game!

Print out the brackets from everyone at the party and track progress. It’s a great way to amp up the competitiveness of the party and it’s exciting to see who comes up with the best March Madness bracket in the end.

If you really want to rub it in at the party, or if you can take a good ribbing if you pick poorly, fill a wall with a DIY poster-sized bracket and place it above the snack table, the TV, or within easy sight so your friends can keep tabs on tournament progress. You can also order a large professional cutout of your bracket from us. Follow your picks of the Sweet Sixteen, Elite Eight, and Final Four in style, and consider making cutouts of others’ bracket picks to fuel competition and energy! 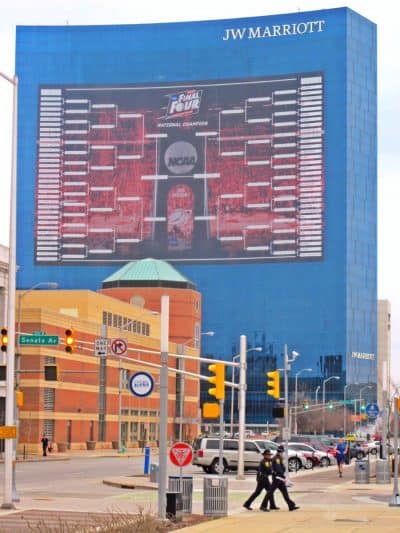 Photo by frankieleon | CC BY

Add the finer details by printing out small images of players from each team and usinguse them as your markers to show which teams are advancing.

For any basketball party, decorations are a must.

A super easy DIY decoration is to print and cut out a bunch of paper basketballs and use double-sided tape to stick them to the wall. It’s a great project for kids too. You could leave a few basketballs in black and white so that the kids can color them in but knowing how fast kids get bored with projects like this, it would be wise to print the majority of these printouts in color.

Then you should hang banners with unique phrases or basketball terms written across them. You can find these on any website selling basketball decorations or at your local party store. You can print free banners too if you want to continue with the DIY route. Printable banners are great because they’re cheap, you won’t feel bad tossing them out after the party, and you can customize what you want on them. All you need to do is get some string and tape the printouts to it. Easy peasy!

Here are some great printouts we found:

The basketballs and banners will really help set the vibe for the party. 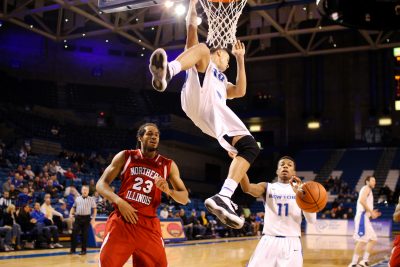 Photo by ChadCooperPhotos | CC BY

For that extra touch, decorate the food table like a basketball court. You can get a basketball court tablecloth or build your own mini-court with a large board and some paint. And don’t forget the themed napkins, coasters, and plates!

The best decorations are the ones you can eat! Buy cookies in the shape of basketballs (or make your own). Serve delicious party foods, like chicken wings, pizza, and hotdogs. And if you don’t want to handle all of the food prep, ask your guests to bring something to share. This makes the party easier to plan and more affordable for you.

Here are some ideas of foods and drinks to serve:

A basketball party isn’t a party if you don’t have games! Get off the couch for a break from the TV and energize with some fun party games.

If you’re throwing a March Madness party, everyone probably already has their own brackets but for plus-ones, anyone who came to the party without a bracket, or for anyone who wants to double their odds of winning (or losing), have each person throw some money into the pot for a random pre-populated bracket.

For even more fun, you can print out popular celebrity brackets, such as from Charles Barkley, Shaq, Jimmy Fallon, and of course, former president Barack Obama. Throw their names into a hat and have a random draw.

Get one of those cheap mini basketball hoops, or play outside if you have a full-size hoop, and see who can get the most free throws out of five shots. Whoever loses, gets a shot of tequila!

You can prep trivia before the game or simply pull up some trivia from your phone on the fly. But make it exciting! Get some teams together if you have enough people and have a prize planned for the winners!

Probably the most famous of all drinking games. Get 12 cups, place six of them in the shape of a triangle on each end of the table and fill each half-full with beer, or a shot of harder alcohol. Try to throw a ping pong ball into the cup and if you make it, the other person drinks it and takes it off the table. Do this until someone loses!

SimpleandSeasonal.com developed this great idea for bingo. When something happens on TV, such as a dunk, foul, or lay-up, mark it off on your card. The first person to get five in a row wins! You need to pay close attention to the basketball game to win this one.

You can pick up a mini basketball hoop from a local retailer for pretty cheap. Pin it up on the wall or doorway, get some balls to throw around, and party guests will have fun picking balls up and trying to make baskets all through the day.

Put a hoop over the trash can or recycling bin and everyone will have fun while cleaning up. But prepare for cleanup after misses.

Before the actual game starts, or during half-time, play a short exhibition game on your Xbox or Playstation. Set the quarters to a minute long for a quick game and see which team wins! NBA 2K22 is going to have the latest players and updated stats for NBA fans.

Decorate Your Party With Cutouts, Big Heads, and Decals

What is a Cardboard Cutout?

Essentially, cardboard cutouts are blown-up images in a high resolution and with vivid colors on a sturdy backing for use as decoration, promotion, or for grabbing attention.

The image can be anything! Just upload the picture you want, edit as desired, and add words or graphics using our customization tool. You can also choose from hundreds of templates to help you achieve the perfect design.

How could cardboard cutouts be used specifically for an NBA Finals party, NCAA March Madness party, or even a youth sports or local league championship? Read on for unique decoration ideas that all fans can support.

Really want to add to the scene? Bring the game to life with life-size cutouts of your favorite college basketball players, NCAA signs, or team logos. These are great for taking fun pictures during the party. 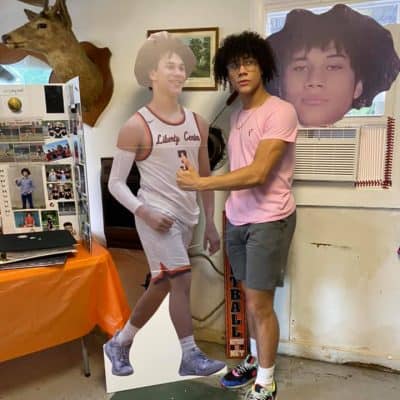 Hole-in-head jerseys can be part of the action, too. Use them for photos, decoration, or as part of a quarter or half-time drinking game.

Cardboard Cutout Standees’s customization tool allows you to create nearly any cutout you can think of, which means you can make a Florida Gators logo, Spurs logo, Clemson logo, Georgia Bulldogs logo, Flyers logo (or any other CBS Sports logo) or Buckeye leaf, in various sizes and with your own modifications. 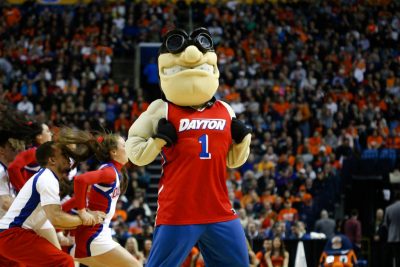 Photo by ChadCooperPhotos | CC BY

You can also create cutouts of various players, their jerseys or just their faces, along with hundreds of other wall decorations to show your support (i.e. the notorious pointer finger).

A perfect idea for parties or at actual games, creating custom Big Head cutouts of players’ faces, jersey numbers, logos, or basketballs with your favorite team’s name printed on it to hand out as party favors to guests will be a big hit. Attach sticks to them and they’re ready for action!

As we said, Big Heads are a great way to support your team or favorite players while at actual games. What makes them so great is that you can get them in various sizes, starting at one foot up to lifesize or larger – yet they are still manageable to carry and keep out of the viewing path of fellow fans. 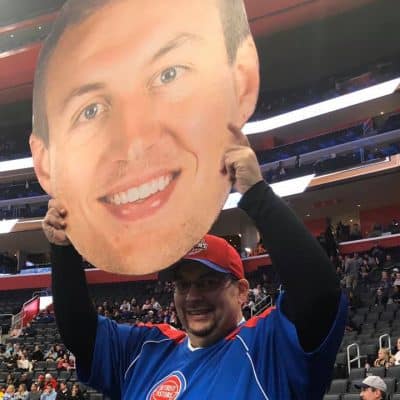 Where to Get Your Cardboard Cutouts

Cardboard cutouts elevate your party decor and make it more entertaining. Not only because they are unique, but because they’re a lot more engaging than any other type of decoration.

Whether you’re celebrating the NBA finals, the March Madness NCAA tournament, a local league game, or having a special birthday party, use cardboard cutouts at your basketball party this year for a celebration to remember. Create your own themed Big Heads and life-size standees made to your liking!